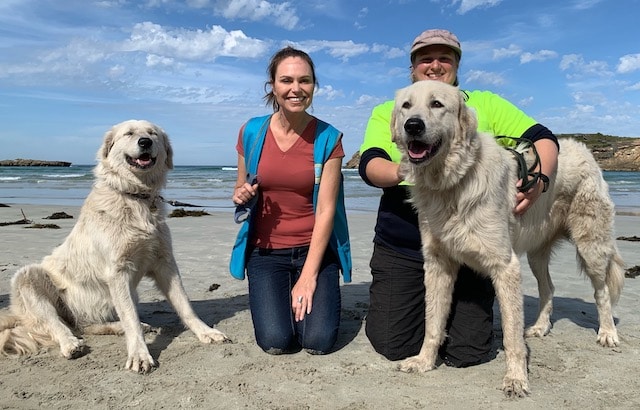 If you have seen the movie Oddball then you’ll know how the beautiful Maremma dogs ended up becoming guardians of the Warrnambool Middle Island Penguin Colony.

If you don’t, the short story is that a local chicken farmer, Swampy Marsh, suggested Maremma guardian dogs could be used to protect the local colony of penguins that were under threat from foxes during the breeding season, after he had successfully used his own Maremmas to help protect his free range chickens.

The project has been such a big success it not only inspired the movie, but it has also shown how guardian dogs like the Maremmas can be used for vital conservation work.

When visiting Warrnambool, it’s well worth taking the time to take part in the tours and education programs they run from December to April, so you can not only find out about this important project, but you can also meet the Maremma ambassador dogs at the Flagstaff Hill Maritime Village, where they interact with visitors and help to educate people about environmental conservation.

Whilst Middle Island has been closed to the public since 2006, in an effort to protect penguin burrows from human trampling which can harm penguins, their chicks and eggs, you can book a place on the ‘Meet the Maremma Tour’ and experience the project firsthand during the Summer.

In this weekend’s episode 3, I got to meet Amor and Avis the Ambassador dogs, whilst the other Maremma guardian dogs spend time on Middle Island during the penguin breeding season. Do note though that you can’t take your own dog along on the tour, so you’ll have to find a local doggy daycare or pet sitter.

PETstock Warrnambool is helping with this awesome conservation project by supplying them with around $10,000 worth of dog food each year.
If you are heading to Warrnambool outside of December – April, the good news is that the ambassador dogs make appearances at local store.

So, if you are in the area and the tours themselves aren’t running, then contact PETstock Warrnambool, to see when they will be paying a visit there.

About the Author: Lara Shannon is co-Host of Pooches at Play and has completed a Certificate III in Dog Behaviour & Training with the National Dog Trainers Federation. Lara also runs her own dog training, minding and walking business in Melbourne’s Bayside area. How Lions Hearing Dogs are assisting the deaf Pawshake research shows our pets are our children

Are your household chemicals putting your dog at risk?

Congratulations to our Series 3 competition winners